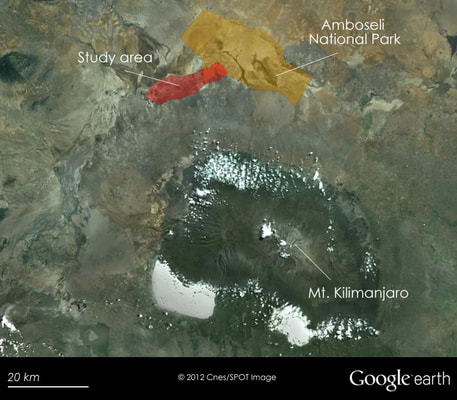 The Amboseli Baboon Research project lies adjacent to Mount Kilimanjaro in East Africa
Offspring Fitness in a Social Primate:
I am a part of the Amboseli Baboon Research Project, a long-term longitudinal research project that studies the a population of savanna baboons in and around Amboseli National Park, Kenya. Demographic, behavioral, and environmental data has been consistently collected on the population on a near-daily basis since 1971, resulting in a rich database that includes data on the lives of nearly 2,000 baboons.
​
My thesis uses a behavioral and life-histories framework to explore how adult baboons influence the fitness of both related and unrelated individuals that live in their social group. 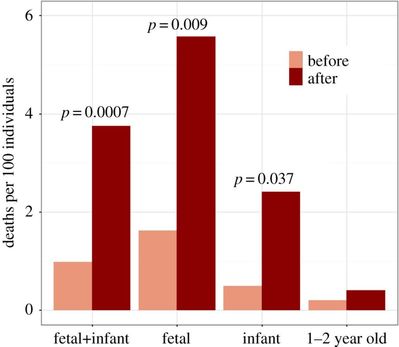 Rates of both fetal and infant death increase in the two weeks following the immigration of highly aggressive males.
Feticide and Infanticide in Amboseli- We performed the first population-wide analysis of the prevalence and predictors of feticidal behavior in a wild population. Using more than 40 years of demographic data we compared rates of fetal and infant death in the two weeks immediately before and after the immigration of especially aggressive males into new social groups. We detected a more than 300% increase in both fetal and infant deaths over this time period (full pdf, Proceedings of the Royal Society of London B: Biological Science). ​​
Male-Mediated Pregnancy Termination: Sexually selected infanticide has received a great deal of attention by behavioral ecologists and evolutionary biologists, despite occurring in only a relatively narrow group of mammalian taxa.  In collaboration with Jacinta Beehner (University of Michigan), Eila Roberts (Michigan State University), and Susan Alberts (Duke University), I constructed a framework that places feticide in a broader context of male-mediated pregnancy termination, relating feticide to the Bruce Effect and distinguishing between the two phenomena. This framework describes both the functions and mechanisms of male-mediated pregnancy termination and makes predictions about the prevalence  of male-mediated pregnancy termination across mammals. Using simulated immigrations of male baboons, we demonstrate that feticidal behavior provides greater reproductive benefits to males than does infanticidal behavior and provides these benefits to males of many species in which infanticide is not beneficial. In a 2019 publication in Evolutionary Anthropology, we argue that the benefits attained by males through feticide and the Bruce effect may have resulted in male-mediated pregnancy termination to be more widespread across mammalian taxa and more important in mammalian social evolution than is sexually selected infanticide.

Maternal Early Life Adversity and Offspring Fitness: A question that remains unanswered, particularly in natural  animal populations, is the extent to which the effects of adverse early life conditions affect the offspring of the individual who experienced the adversity. Previous work by Amboseli researchers has demonstrated that early life adversity results in reduced longevity for those individuals that survive to adulthood. I have extended this analysis to show that the early life adversity that a female experiences influences the survival of her future offspring, independent of the environment that those offspring experience (see our 2019 publication in eLife Figure 1 from that paper, below).

My current work on this topic focuses on identifying the behavioral mechanisms involved in this intergenerational transfer. In from 2018-2019, two field assistants and I traveled to Amboseli to intensively sample 48 mother-offspring dyads to begin to test my hypothesis that the early life adversity experienced by females reduces the quality of maternal care that they are later able to provide, thereby leading to deficits in offspring survival. ​Data collection is still on-going, but we have been able to show that mother-infant pairs show repeatable differences in a wide range of measured parameters, a necessary pre-requisite for testing for individual-level differences.

Zebra finch beaks vary continuously from red to orange. We are working to determine whether female zebra finches perceive these differences in a categorical or continuous fashion.
Information Extraction and Animal Signaling:
Parallel to my dissertation research, I am interested in questions related to the mechanisms involved in and functional implications of animal communication systems and information extraction.

Categorical Perception of Signals: Many signals and cues vary in a continuous fashion, but an open question in animal communication is whether animals perceive and respond to these cues in a continuous or categorical fashion. For example, in many species of birds and fish, individuals use carotenoid-based coloration to assess the quality of other individuals. Although color is known to be perceived categorically in several species, including humans, it is unknown whether animals categorically perceive color across a biologically relevant color gradient. In a collaboration with the Nowicki lab and post doctoral researchers Eleanor Caves and Patrick Green we are performing a series of experiments that test whether zebra finches and other birds perceive colors in a categorical or continuous fashion.

The first of these results were published this year in Nature, and show that female zebra finches perceive colors along a red to orange spectrum in a categorical, not continuous fashion. A second set of experiments, published in Proceedings B, found a categorical boundary along the blue-green boundary spectrum.  In collaboration with Jimmy Peniston (University of Florida), we are also building a theoretical framework from which to view the influence of categorical perception on sexual selection.
​

Category boundaries in the blue-green and red-orange color ranges are indicated by increased discrimination between comparisons that include the 2-3 and 5-6 color steps, respectively. The boundary is sharper in the red-orange range, perhaps because it is more salient for signaling.

Behavioral Senescence of Swamp Sparrows: The quality of a male birds’ song is generally expected to follow one of three age-related patterns: (1) song quality is unchanging throughout adulthood, (2) song quality continues to improve in early adulthood (delayed maturation) before becoming static or (3) song quality continuously increases throughout adulthood (continuous delayed maturation). Generally, researchers measure the same birds' song in its second year of life (first year of adulthood) and then again in the year that follows, testing for delayed maturation. Measurements in a third year reveal either more maturation or stasis. But this approach doesn’t capture any changes after the third year. For example, a gradual age-related decline in song quality following a peak at age 2 is very unlikely to be detected.

What had been absent from the literature was a dataset of song recordings from across animals entire lives, which could capture within-individual delayed maturation in song until birds reach a peak quality, followed by behavioral senescence.

In 2004, Steve Nowicki and Bill Searcy collected a cohort of nestling male swamp sparrows from the marshes of Crawford County. Then Susan Peters and Steve hand-reared the sparrows and tutored them on adult songs from the population. From 2005-2015, Susan and Steve recorded the males in may of every year of their adult lives (until age 11) and measured various characteristics of their songs. And then in 2018, they invited me to analyze those metrics to test for age-related changes. 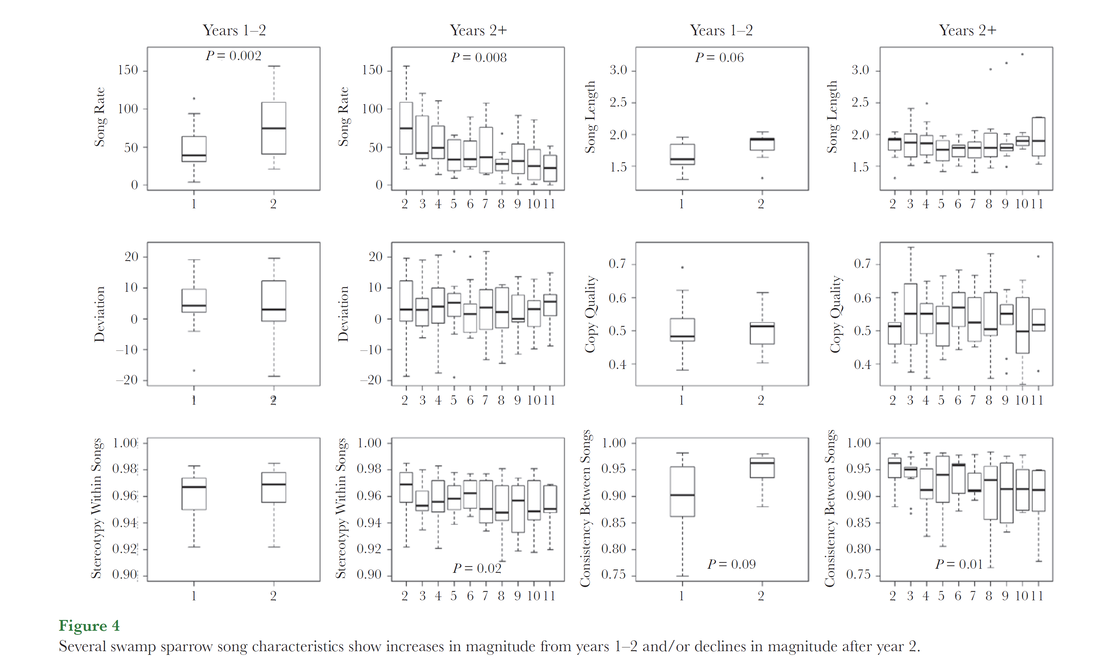 We then followed up this descriptive analysis with a field experiment in the same population where the birds originated. We used playbacks of males songs' recorded when the males were either two or ten years old to simulate intrusions into males territories. Each territorial male heard either two-year-old or ten-year-old songs on one day and then the opposite songs from the same intruding male two days later (we were blind to the age of the playback songs at all times).

As predicted, territorial males responded more aggressively to the playbacks of two-year-old songs as compared to ten-year-old songs from the same male. This is the first demonstration, outside of humans, of animals discriminating between peak-quality and senescent vocal signals. We published this work in 2020, in Behavioral Ecology.